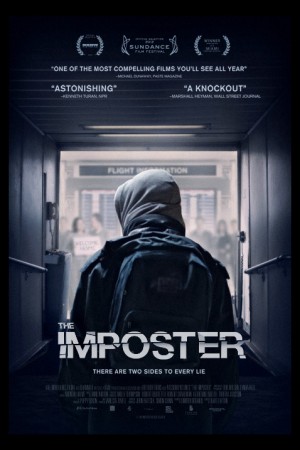 The imposter, a 2012 documentary film about a young Spanish man who made the astonishing claim that he was, in fact,t the son of an American family who had been missing for the more than three years. This is one of the strangest stories in recent years since the man is either an extremely treacherous con artist who wanted to take advantage of the Texan Gibson family or he was genuinely their son who has been missing for so long, hence the title of the movie “The imposter”. You really could not make a story like this up and it had brought the grieving family under close scrutiny across the internet as a result for being naive.

The story of the Imposter starts way back in 1994 in San Antonio, Texas where out of the blue 13 year old Nicholas Barclay suddenly went missing, with out warning or witnesses. The Gibson family were suddenly thrown into a vicious cauldron of emotions with no answers as to the whereabouts of their son. After three years the outlook of finding Nicholas seemed bleak until they received a phone call from a man in Linares, Jaén, Spain. He claims that their son had been found and is at the local embassy. At this point, the story gets strange, because it seemed that the 16 year old was not their son at all.

Cary Gibson, Nicholas’s sister goes to pick up the man and at first sight, she did not recognise him; maybe he had aged rapidly due to the stress and trauma of the incident but, something just did not seem right. After all their son Nicholas had blonde hair an blue eyes and would be 16 years old, the new man spoke with a french accent, had a dark complexion with brown eyes and the family later discovered him to be 23 years old. At this point, the family had taken him in but it is pretty obvious the new guy really was “The Imposter”, a devious conman who’s motive had not been revealed yet. Of course, a grieving family looking for hope is vulnerable which is more than likely why they were taken in by something that looks so obvious from the outside.

Like the plot from a Hollywood movie the documentary actually turns into a thriller, in an informative manner. The Imposter was directed by the renowned owner of the production company RAW,  Bart Layton who has produced many successful TV shows over the years winning many awards. Early on in the documentary, the con man is revealed to be frenchman Frederic Bourdin who was known by intelligence agencies to have committed identity theft more than 500 times before but this was on a new level.

What I believe happened.

Nicholas came home from playing basketball angry at his mother for not picking him up and angry at his brother for not waking up his mother. I don't think a screaming match ensued between the three, but most likely attitude was thrown left and right until finally it hit a nerve in Jason. He probably pushed Nicholas or chased him in attempt to hurt him (not kill) and in the process Nicholas fell and died. My guess is he hit his head on something.

The mother (Beverly) and Jason ended up realizing that they couldn't call the police because of their history with drugs and Beverly's recent drug addiction. They would most likely end up serving serious time seeing they were unfit guardians in possession of drugs when Nicholas died. Therefore they plan to hide the body. They end up burying it in the backyard just how it was said in the film. Fastforward: Beverly checks into rehab within months of the disappearance. Kinda strange to alienate yourself from your family after your child disappears if you ask me. And the fact that she did it almost immediately tells me she wanted to be clean just in case the police ever came to ask her questions.

In the following year or so, I believe Beverly ends up telling Carey what happened. I don't think Carey was there the night Nicholas died nor did she have any involvement whatsoever. Fastforward a few months: the memories of the house where Nicholas died become too much for Beverly to handle so they move. Before they move she has Jason dig up Nicholas' body and dump it somewhere else. This would explain the leftover pieces of tarp or whatever the new homeowner found back there.

Fastforward 2 years later: Carey gets a call that they "found" her brother. First we're told that she screamed over the phone (possibly horrified because it was not possible since Nicholas was dead; OR remember she wasn't there the night Nicholas died, so she must have believed that her mother and brother lied to her and her scream was sincere because she believed her little brother was actually alive). News about "Nicholas" being found in Spain gets back to Beverly and Jason. They reassure her that the boy they have found is not Nicholas because they know what they did. Instead, they make up a plan to go along with and whoever that "person" that comes home claiming to be Nicholas is will be brought into their family with open arms so it becomes believable just in case the truth of the impostor is ever revealed they will come out looking like innocent victims.

They knew if they didn't go along with it, most likely the police would relaunch the investigation of Nicholas after they were done dealing with the impostor. They never meant for the truth of this impostor posing as Nicholas to get out. They wanted to live their lives as if this really were Nicholas. So when the FBI agent called Carey and told her not to come to the airport, she did it anyway acting as if nothing were wrong. That was Carey's way of telling the agent to leave them alone/they're fine. I think right after the phone call, Carey went to Beverly and told her the truth was out. They made one last attempt by Beverly telling Carey to go pick up "Nicholas" and bring him home. They knew if he stayed with the agent, everything would be revealed that night. But like Frederico said "it was only a matter of weeks" before the full truth came out. There was no preventing it. It was inevitable in this case. But God knows this family tried. We all saw how hard they attempted to keep this "boy returns home after disappearing 3 yrs ago" heroic tale from the media. No one does that.

So bottom line, both Frederico and the family knew the actual truth. However, I don't think they ever told one another what they knew. They sort of just pretended and settled on a silent agreement. "You pretend to be Nicholas for us, you can live your life here in America". It would make sense that they never talked to each other about it. They would both benefit from the silent deal. At this point, Frederico managed to put all the pieces together and concluded that they in fact killed the real Nicholas. Why else would they pretend that he was their son? I honestly do not believe he was lying when he said this. The whole "Beverly confessed to me" I think is made up in an attempt to make the mother look even more guilty than she already was. Basically he put salt in the wound at the last minute for no valid reason other than to taunt the family. And it worked.

Months after the scandal was exposed, Jason knows as long as he's around, the closer the police will get to naming him the prime suspect. I wouldn't say he committed suicide per se. He was probably on a downward spiral and by the time the truth was revealed he was at his end. No Jason=Dead end (no pun intended). Which is exactly what happened. Carey and Beverly can now breathe a sigh of relief. The truth along with possible evidence died with Jason.

There were so many things in this documentary that made me extremely suspicious of the family.
-very beginning; how can someone not recognize there own flesh and blood? it was 3 yrs for crying out loud.
-Jason's odd apathetic behavior upon learning "Nicholas" had returned
-Carey still showing up at the airport even after being told not to, after learning that the FBI agent knew "Nicholas" was not Nicholas
-Mother refused (went ballistic) to do a blood test to prove whether "Nicholas" was her son or not
-Jason reporting to the police, one month after Nicholas' disappearance, that Nicholas tried to break into the home. No other sighting was ever reported by anyone therefore giving off the impression Jason was trying to throw off police by making it seem Nicholas was still alive and a runaway
-the family moving from the home
-mother failing the third polygraph test very unusually. Test was going off the charts
-Right after Nicholas went missing they claimed the story never made it on the news. this makes me believe that they didn't do enough to put the story out there. It's very unusual for a white family in southern Texas to be completely ignored when they report a child missing. Just saying.
-why wasn't there more of the investigation? why didn't the police ever question the family? My guess is the family tried to throw them off multiple times to the point where they didn't see a reason to suspect them in anything.

Carey and Beverly are two very lucky people. In my opinion, they got away scot free. However, they will always live with the guilt and trauma of the disappearance of Nicholas. Which is well deserved since I think they killed him.

It's so strange how life works. It's as if this was all meant to be even under the unusual circumstances. Somehow, a professional con artist/sociopath/liar stumbles upon the name "Nicholas Barclay" when looking for an identity to steal. It's almost as if Nicholas himself was trying to reach out so finally the truth of his murder could get out and justice could be served. Even if it meant just becoming a theory. Knowing people doubt Carey and Beverly was probably enough justice for Nicholas.

The Lost Tomb Of Jesus

Lo and Behold, Reveries of the Connected World

The Death of Yugoslavia