Waco: The Rules of Engagement - documentary 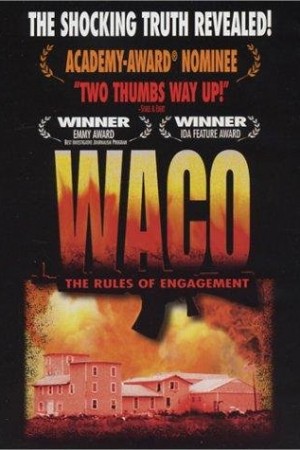 Nominated for Best Documentary at the 1997 Academy Awards. The true story of the events at Waco, Texas 1993.

A controversial documentary about the stand-off between an unorthodox Christian group (the Branch Davidians, under the leadership of the young, charismatic David Koresh) and the FBI and ATF (Bureau of Alcohol, Tobacco and Firearms) in Waco, Texas from February to April 1993.

It presents a different spin on the events from that of the United States government, which stated that the Branch Davidians set the fire that destroyed their compound, and killed the vast majority of them, on April 19, 1993.

Using footage from the 51 day siege, including the congressional hearings, people involved in all aspects of the siege, and from experts - technical, psychological, and religious, the movie suggests that the Branch Davidians were not a cult, but a valid religious group practicing under First Amendment freedoms.

They fell victim to the ineptitude of an ATF raid designed to garner the agency positive attention, and the cruel, methodical work of the FBI, who over-saw the murder of the Davidians and then quickly covered it up

Why you should watch it:

This is an amazing investigative film exposing the FBI and ATF’s brutal tactics in the 1993 siege of David Koresh’s, Branch Davidian compound in Waco. One of the best documentaries of its kind, The Rules of Engagement will shock viewers as it catalogues the violence visited on the Davidians by Janet Reno’s Justice Department and culminating in the repeated tear gassing and eventual inferno that cost the lives of 86 men, women and children. This is a must-see for anyone interested in how the FBI and media surpress the truthand collude against the public.

When Albums Ruled the World