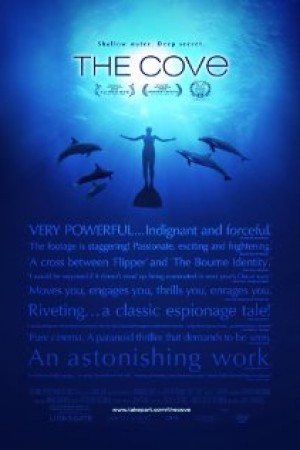 The Cove: Shallow Water. Deep Secret: A documentary which takes us into the hidden world of the cove. The Cove explores the lives of dolphins and also looks into and questions the Japanese hunting practices used to kill them. Academy Award for Best Documentary Feature in 2010 The Cove seeks to educate people about something that we rarely see yet it is happening all of the time.

The documentary also calls for action against mass killings of dolphins.

I would just like to add my opinion on the whole hypocrites/vegetarian/omnivore issue.

First off I think everyone is bothered by how farm animals are treated. Anyone who isn't truly is a horrible person. But the fact is that in today's society we can never boycott everything that supports something cruel. We can only choose to support the causes we feel most passionate about. The real hypocrites are those vegetarians calling others hypocrites that still support any other animal products (eggs, milk, leather, cosmetics tested on animals...). But even the ones who work hard to live an animal friendly life still support cruel treatment of workers if they buy anything made in India, Korea, China... They support the wars and exploitation of people in Africa when they buy any electronic device or a diamond and so on. Don't get me wrong, I'm not one of those people who say that there are so many screwed up things in the world that we shouldn't bother to do anything about it. I don't buy wool, leather of cosmetics tested on animals, I help at the local animal shelter where I adopted my dog, I also adopted a rescue ferret, take care of the stray cats in our neighborhood and help educate people about animal issues. I have a lot of respect for anyone who takes up a cause, especially vegans. I just don't think anyone should pretend that their hands are completely clean.

I also think that many animal activists are much too aggressive. There is definitely a lot of truth in the saying: "You catch more flies with honey." I see a lot of people put off by any animal activism because they have been attacked by the activists in the past. I have "converted" a few people or at least got them to open their eyes when it comes to animal issues. And I've always persuaded people with being educated about the issues, explaining the facts and my opinion in a calm way and being as realistic as I can. I'm certain that I wouldn't have changed any minds if I had approached aggressively. Also one very important thing to remember is too learn when to walk away. Some people just hate those of us that care and will try and make themselves feel better about doing nothing by attacking those that are trying to change things. I have been sucked in to arguments with them and it never ends well. They don't respond to reason because they don't want to debate, they just have and idea in their mind that they will never change no matter how wrong they are.

My next point is also an example of my previous point. I eat meat. Not often and I do plan to give it up but for now eventually but I do eat it. So my message to other "omnivores" is: don't pretend that you're eating it for any other reason than because it's convenient and tastes good to you. At least have the decency to admit to yourself that your body doesn't need it. Stop it with the "it's natural" excuses because by that theory you should eat bugs, grubs and if you're lucky and found a dead animal carcass you could feed on that as well. Because that's what our ancestors ate. What is happening to animals in the farming industry is as far away from natural as it can get. I won't get in to all the silly "misconceptions" or intentional ignorance as I like to call it. Here is a fun list with all the oh so original "arguments" against vegetarians/vegans: http://a4.sphotos.ak.fbcdn.net/hphotos-ak-snc7/383865_10150437773548557_677863556_8581711_1144677176_n.jpg

And lastly, the point of the dolphin problem is not that they deserve more sympathy than other animals or that their lives are worth more. The reason why it's worse than the cruelty that farm animals go through is that they're wild. All animals and humans suffer equally but the dolphin slaughter is also taking a huge tole on the ecosystem there. It's ruining an entire species for no good reason. Not that there is a good reason for massively slaughtering a whole species but you know what I mean. And the big difference is that his could end right now and there wouldn't be any huge consequences. Because let's be realistic here. Animal farming will most likely never stop and even if it did it will definitely not stop anytime soon. The best that can be done is to cut down animal product consumption and with that provide the animals with good living conditions. I think a big problem is that a lot of activists are not being realistic. They are going for the "all or nothing" approach with which we will probably end up with nothing. It's important to take baby steps and celebrate every little victory. In my country we recently got a first prison sentence for animal cruelty. It was only a month (take in to account that the maximum sentence in our country is 35 years, no matter what the crime) but I was extremely happy while a lot of people were still only bitching about how it's not enough. Of course it's not enough for what the man did but it's a big step forward and we should be happy about it.

I'm sorry for my long post of ramblings but I just had to speak my mind. In a nutshell I think everyone should take a step back, look at everything more realistically and not be so stubborn.

The Lost Tomb Of Jesus

GENIUS by Stephen Hawking: Can We Travel in Time?

We Are Legion: The Story of the Hacktivists