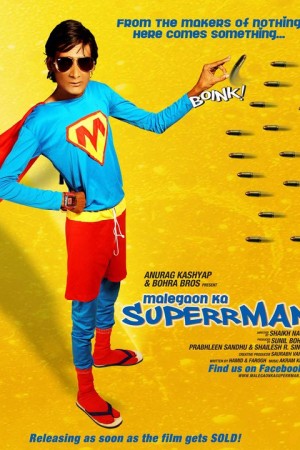 Supermen of Malegaon is a 2008 documentary film directed by Faiza Ahmad Khan.

Filmmaking is about passion first, technique and technology second, and this lovely film underlines just that. Terrible working conditions and relative poverty isn’t about to wipe the smile from one man’s face, a man who loves to make low budget movies for his town – and see them smile. Enthusiasm and a can-do attitude is an infectious thing – this is a story of creativity and joy, something we don’t see nearly enough of in these doom laden times.

Welcome To Malegaon, an industrial town a hundred miles north of Mumbai in Northern India. Malegaon is very much in Mumbai’s shadow, and not much happens in the city but for the incessant cloth production and the occasional Muslim – Hindhu bout of race riot. Frankly, it’s a grim place to be, but at least one man is trying to raise the city’s spirits.

In Shaikh Nasir, Malegaon is lucky enough to have its very own David O. Selznick. Nasir has been churning out spoofs of Bollywood’s best films for a number of years and locals flock to performances of his popcorn fantasies. Now he has sights firmly set on an American classic - Superman.

Armed with a budget of $2000 - about 100,000 times less than Bryan Singer recently spent on his underwhelming 2005 reboot – Nasir begins by casting the very un-heroic looking Sheikh Shafique as the titular hero. When questioned on the choice, he reasons that Superman would be "a victim of many diseases" and would probably be riddled with "asthma from flying through pollution" - hence the choice of the weedy, pallid Shafique for the role.

Shafique who, like all the other members of the crew, works inhuman hours on a power loom for a measly $100 a month, finds this an opportunity too good to pass up. But little does he know that Nasir’s budget won’t extend to hiring a stunt double, and soon he finds himself being hurled painfully through the air, nearly drowning in a lake, and almost being crushed to death by a bus. The fact that he only escapes by falling back into the street’s open sewer is little comfort.

Somehow the die-hard crew manage to make it through a less than fluid shoot, the production being a true labour of love. The video editor, also the sound recordist, even shaves his lustrous head of hair to take on the role of Superman's nemesis – Lex Luther.

In the documentary Supermen of Malegaon Director Faiz Ahmad Kahn presents a quirky, affectionate, and deeply amusing portrait of men making the best of things under the most trying of circumstances. They see themselves as local troubadours and make these films without pretensions to greatness. It is easy to see why they do it – the mirth they inspire in their fellow townspeople is possibly the only source of levity anyone in Malegaon is going to get.

Life and Death of a Star