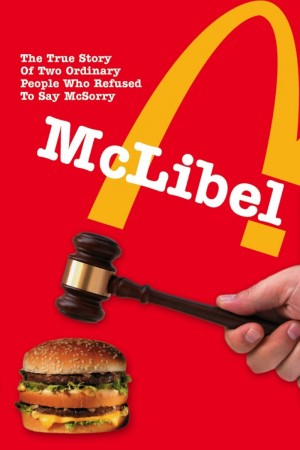 The McLibel documentary looks at the biggest PR disaster in the food giant McDonald's history. libel laws were used by McDonald's to ensure that there was no criticism towards their company which worked very well until they sued Helen Steel and postman Dave Morris. The case led to one of the biggest trials in English history.

Every part of the corporation's business was cross-examined: Everything from McJobs, and junk food to animal cruelty, damage to the environment as well as marketing to children.

I fully agree with the original message of the movie, that McDonalds had overstepped their power and used unfair laws to enforce a ban on criticism of their company. For a low-budget documentary it was well-made and presented.

I feel the need to comment, however, on the growing brand of "environmental socialism", which through many documentaries like this on (and prominently, the work of Ken Loach), has latched itself firmly to traditionally "green" politics to re-broadcast the old, and not particularly welcome, message of unbridled socialism as a means to the liberation of the world or some such utopian nonsense.

One thing I noted was the terrible naivety of some of the statements made, the redistribution of land for instance, or the removal of corporations and governments that oppose this, and especially the word "revolution". This message always gains ground because it is simple, and appealing, and often avoids further contemplation. Quite who will be in charge of redistribution, or removal, or who will lead this revolution, is brushed aside. The "community" will do it, the "people" will be in charge!

I think it's fair to say this is never the case, elites will always manage the most important aspects of society, be it in the name of the people or the name of an unelected monarch. Attempts to change this were called various -isms and were responsible for some of the worst crimes of the 20th century, and after it all, the people were still stuck with an autocrat of top.

The question is, does society in general feel the system we have is fairer now than a more socialist system? Unfortunatley for the protestors, despite their most earnest well-intentioned efforts, the answer is yes. Macdonalds has a lot of pressure to change at the moment, its profits slumped (noted in the film) so it had to change, to become profitable again. Would that happen in this utopian society Ken Loach and others want to build? I doubt it, socialism breeds bureaucracy and inefficiency, and wherever there is a strong capitalist country out-competing it, a socialist society will suffer (Think nationalised Britain in the 1970s). Macdonalds may offer low wages and high turnover, but the reason for that turnover is employees using it as a staging post to better things. Of a generation of 17 year olds working in its kitchens, how many do you think take burger-flipping on as a career?

The most crucial thing to consider is, despite their long slog, they were able to get justice in the end, and were able to take on their own government, which speaks volumes as to the real justice in society, a justice I think that would have been unavailable to them in some sort of Soviet style society, which, by their rhetoric, is what I presume they want!

Agreed, they are always given a lot of stick while other companies that are doing much worse get away scot free..

The Dark Ages: An Age of Light