In Debt We Trust: America Before the Bubble Bursts - documentary 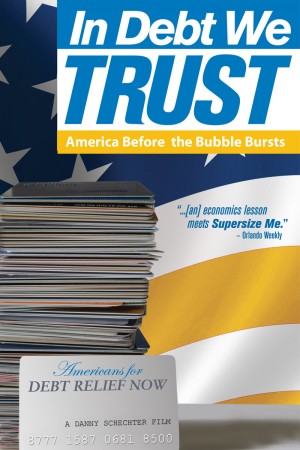 In Debt We Trust is an expose of the rising crisis of debt in North America. The film focuses on the collusion of credit card companies, lobbyists, corporate media and the US government in encouraging debt and delivers a stark warning about this mounting global problem.

The film reveals a hitherto unknown cabal of credit card companies, lobbyists, media conglomerates, plus the George W Bush administration itself, who have colluded to deregulate the lending industry ensuring that a culture of credit dependency can flourish.

Consumer debt has doubled in the last 10 years and for the first time, America has a negative savings ratio. The average citizen lives beyond their means struggling to make minimum monthly payments and is unable to manage their debts.

Schechter exposes the mechanisms behind the hidden financial and political complex that results in house repossession from small debt. One expert in the film dubs this: ‘ 21st-century serfdom’.

The whole world depends on the economic stability of the United States. Yet as its national and consumer debt escalates it puts the global economy at risk. Already credit crises are erupting in many countries. This timely film delivers an urgent warning that can't be ignored.

Why You Should Watch it

There's a lot of eye-opening stuff here, as well as a strong call to action lest this house of cards (not unlike the reckless speculation of the 1920s Stock Exchange) collapse into a Great Depression-redux. Schechter interviews not only average-Joe’s and Jane’s, but also a variety of alarmed experts including ‘Credit Card Nation’ author Robert Manning and activist Congresswoman Sheila Jackson Lee.

Setting out to prove that America is drowning in debt, Danny Schechter finds that he is as guilty of anyone else. Approaching the subject via the small-picture of individual families suffering from uncontrolled borrowing, he builds up a commentary of a country collapsing under the weight of its unfettered buy-it-now culture. And as cultures around the world invariably follow American trends with a few years’ lag, other countries aren’t far behind.

The producers own In Debt We Trust has supplementary information on the film along with ways you can increase awareness of the impending crisis, and Wikipedia explains personal debt in relation to the wider economy and inflation. Direct is a UK Government information site offering impartial advice on how to escape the debt trap while Money Made Clear has a debt test to see if you’re drowning in debt maybe without even knowing it. Open Democracy explores the very real possibility of the First World Debt Crisis in great depth as well as how it may be avoided.

Do You Trust This Computer?

Traders: Millions By The Minute